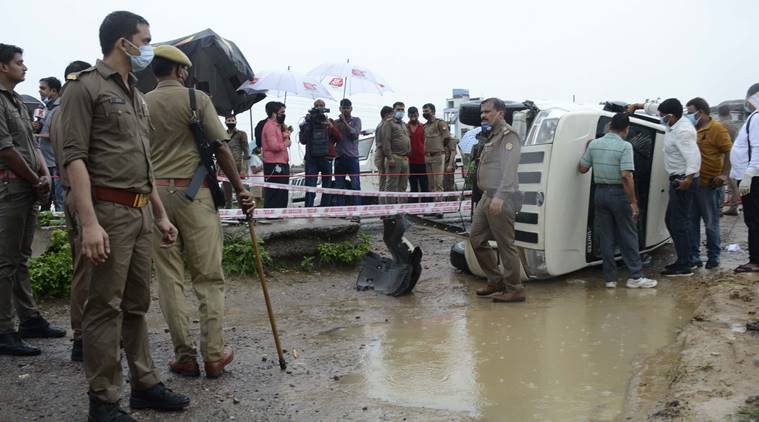 While the courts will adjudicate on the legality of Vikas Dubey’s ‘encounter’, on 10th July 2020 millions of Indians have determinedly aimed to ‘encounter’ the ‘Rule of Law’. This article, without contesting the facts of the case, simply shows a mirror to the reaction of the Indian citizenry towards this encounter. It throws light on the promises made but not kept, rules drafted but not enforced and the Constitutional Morality being sacrificed at the altar of anarchy.

Vikas Dubey, a Brahmin strongman from Kanpur (Dehat) was popular for gunning-down BJP MLA Santosh Shukla, inside a Police Station and was let scott-free for lack of evidence. He had since then been an integral player of U.P. politics with connections in every party. Involved in over 60 criminal cases, Dubey martyred 8 police personnel on 2nd July during a raid in Bikru village, and fled.

The news of Dubey and his henchmen martyring 8 policemen enraged India. As the nation prayed for the well being of the families of the deceased brave hearts, CM Yogi Adityanath launched the probe into the killings of the police personnel and fortunately, after days of police investigations and STF (Special Task Force) taking the command of the operation, he was identified by Mahakal temple authorities in Ujjain, Madhya Pradesh and was subsequently arrested.

While the investigation was underway and even after the arrest, the charcha (discussion) at every nook and corner of the country was as to how the police can and will encounter the accused. This they believe was necessary to avenge the death of the police personnel. This discussion was fueled with Prime time debates , and to the shock of many the Police obliged with bollywood style encounter.

Part III of the Indian Constitution promises human rights to the most egregious of all. It is the ‘Rule of Law’ that distinguishes us from totalitarian regimes. Extra-judicial killings jolt the very foundation of our social contract, and celebrating such ‘encounters’ are early signs of anarchy.

While being elected for its fourth term in the United Nations Human Rights Commission India pledged 28 commitments to the International Community. India vowed to, “continue to uphold the highest standards in the promotion and protection of human rights as well as fostering a culture of transparency, openness and accountability in the functioning of Government”. Such killings are in flagrant disregard of Article 6(1) of the ICCPR which is a non-derogable norm guaranteeing right to life to all humans.

Law of the land

Considering ‘Encounters’ as a tool to deliver Justice is not what the laws of our nation prescribe. Section 96 to 106 of the Indian Penal Code, 1860 provides the right to an individual to resort to proportionate force against another individual(s) in order to protect his and others’ lives and property.

Even Article 21 of the Constitution of India provides every individual with the fundamental right to protect its own body against danger of any kind. The Apex Court has considered the right to private defence as a fundamental  human instinct that is recognised in our criminal legislation as well. In Suresh Singhal v. State (Delhi Administration) 2017(2) SCC 737, the Top Court  held,

It is often seen that the law enforcers succumb to the majoritarian standards and commit grave illegality to avoid unnecessary chaos in the society that in reality occurs only due to lack of awareness and necessary legal acumen among the general masses. However, no degree of possibility of any future chaos can be taken as a ground by the officers of the law to take law into their own hands and to surrender before the will and demands of the people.

Widespread opinions about an accused person and the hearsay or even previous proved misconducts of the accused does not grant police the right to diverge from the due process and take any step contrary to law to bring the accused in terms with the judicial process. In this context, it is imperative to analyse specific observations of the Hon’ble Supreme Court

“It is not the duty of a police officer to kill the accused merely because he is a dreaded criminal. Undoubtedly, the police have to arrest the accused and put them up for trial. The Supreme Court has repeatedly admonished trigger-happy police encounters. Such Killings must be deprecated. They are not recognised as legal by our criminal justice administration system. They amount to State-sponsored terrorism. But one cannot be oblivious of the fact that there are cases where the police, who are performing their duty, are attacked and killed. In such circumstances, while the police have to do their legal duty of arresting the criminals, they also have to protect themselves”

The above observation is what is the law of the land and our citizens and the executive need to accept this as the only way to attain ‘Justice’. The romanticising of the extrajudicial killings and the confessions might look flashy in Bollywood blockbusters, but certainly cannot be enjoyed or celebrated in the society and in the country that is founded on the principles of Constitutional Democracy and not vigilante justice.

The Supreme Court in the case of  People’s Union of Civil Liberties (PUCL) v. State of Maharashtra questioned the correctness of over 90 encounter killings by the Mumbai Police between 1995 and 1997 and came up with detailed guidelines for encounters which may be read here.

Annihilation of the Constitutional Democracy

The notion of Justice in the eyes of the law has failed to make an impression upon our society which has forced the society and its people to adopt and promote the illegal and unlawful ways of imparting justice and making it a new normal. It is time that we as an individual unit and also as a society must understand the basis of the law on which our country functions, so that we can prevent ourselves and others from venturing into the realm of anti-constitutional measures of imparting justice and the ideas governing them. Ours is a country that thrives on constitutional ethos wherein the ‘Rule of Law’ is what governs our actions and in-actions. To meddle with the affairs of legal procedures will not only render the laws of our country futile, but will eventually lead to the complete annihilation of the idea of constitutional democracy that has till now been the guiding principle of our nation.

Failure of the Press

The narratives built by social media pages and news anchors can never replace the laws passed by the Parliament and cannot fill lacunae, if any, in the laws of our country. The fourth pillar of our democracy has failed us yet again. It indulged in debates which instigated instant justice. This has entrenched the basic instincts of our society. It further went on to celebrate the encounter and mildly mourn it as with Dubey, many secrets now rest in peace.

Failure of the executive and the society

Moreover, the gaps in the justice delivery system can only be filled by the laws that are sanctioned by our Constitutional morals and not by the majoritarian views of the society. It is the highest duty of the law enforcers and the courts to uphold this idea of justice and to not succumb to the pressure of the majoritarian views.

Without going into the veracity of the claim that the encounter was illegal, why was a dreaded gangster not handcuffed and managed to snatch a service weapon, I ask why is the police happy? They failed to do their job of nabbing a criminal, and killed him in the name of self defence. Why shower them with rose-petals and garlands. We have set the norms wrong. We should celebrate every time an honest police officer files a robust charge-sheet before the court of law, everytime justice is served we must jubilate as a society. We fail to celebrate actual justice and end up idolising ‘Singhams’. If an encounter is inevitable,  well so be it. But is it necessary to celebrate the same without knowing the actualities of the encounter?

The Road to Justice

The hallmark of a democracy is not ‘efficiency’ but ‘transparency and accountability’. A democracy ensures your and my rights are not violated in order to achieve swift justice. As a society we need to appreciate that the road to justice can never be easy as the means to achieve justice is always more important than its end. Self-created norms of justice and law can never serve any purpose in our society unless our Constitution backs it.

The incompetence of the justice delivery system has played a significant role in drawing people away from the ‘law’ as it is, and replacing it with self-made ideas of law and subsequently justifying it. But for how long will this idea of replacing the actual law with the artificial one can prevail in a constitutional democratic country like India?

It is time that the police are equipped with state-of-art technology to nab criminal masterminds and the courts are provided with the necessary man-power and infrastructure to deliver justice more swiftly. We must protest and rile up the pressure for better allocation of funds and ensure that gangsters like Dubey meet their fate through the judicial process. The criminals must fear the law made and not those with pistols in their bolster.

One thought on “Democracy Encountered!”