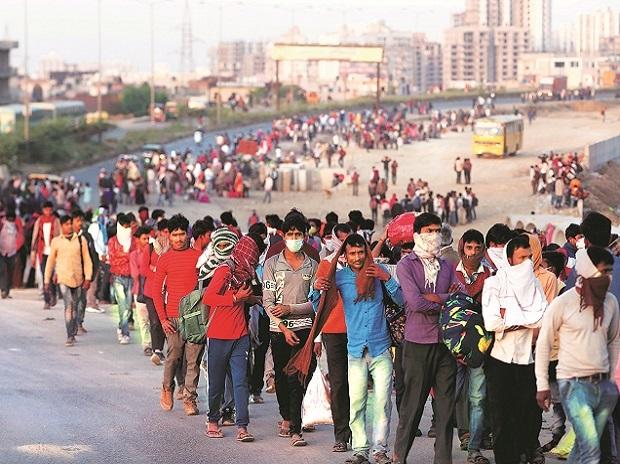 CORONAVIRUS & THE MIGRANTS: A RUN FOR LIFE!

The recent human flood of migrant workers flocking towards their villages was a worrisome situation for the central and the state governments. With no jobs, homes, savings, social security or ability to earn daily wages in cities, the village offered the only chance of survival. The situation not only exposed the ambiguous planning and shoddy execution of the lockdown but also the greater question of much required reforms in our labour laws & inter-state migration laws. The latest Periodic Labour Force Survey (2017-18) found that only 47% of urban workers have regular, salaried jobs. Even among workers in formal employment, over 70% do not have contracts, 54% are not entitled to paid sick leave and 49% do not have any form of social security benefits. The remaining 53%, who work in the informal sector, have even less access to social protection. These workers: taxi drivers, road-side vendors, owners of small businesses, tourist guides, restaurant workers etc., will be the worst hit as demand for their services falls. They also do not have the means to remain in quarantine or take the day off if they are ill.

The labour market in India is characterized by sense of dualism; an illiterate, unskilled, unorganized, unprotected & a mute majority of workforce and a literate, skilled, organized protected and a vocal minority existing side by side. The latter influences the policy making by acting in unison with the state and thus forces the state to pursue policies based on political considerations rather than consideration of the market forces & labour/migrants rights. This distortion leads to a preferential treatment by the state between organized and unorganized labour forces. The labour & inter-state migration policy needs to be, reimagined considering unorganized sector in a more substantive way!

In 2008, Unorganized Workers Social Security Act, 2008 was enacted for labourers in the unorganised sector. The primary objective of the legislation was to promote social security schemes.  However, neither does it secure the rights of the exploited unorganized migrant labourers nor does it address their real problems. The Act creates no legally binding obligations on part of the government or the employer. Furthermore, it doesn’t recognise agricultural labourers (who work in the field of big landlords) as unorganized labourers leading to a complete exclusion of agricultural labourers from the social security schemes under the Act.

Furthermore, according to section 2(1) (e) of Inter-State Migrant Workmen (Regulation of Employment and Conditions of Service) Act, 1979, “inter-State migrant workman” means any person who is recruited by or through a contractor in one State under an agreement or other arrangement for employment in an establishment in another State, whether with or without the knowledge of the principal employer in relation to such establishment. If an establishment wants to recruit five or more inter-state workers then it must register itself and the contractors must be licenced. Furthermore, the contractor must pay displacement allowances (section – 14) and travel allowance (section – 15) for both outward and return journey of the migrant worker. The bare reading of these provisions makes one wonder whether the migrant workers flocking towards their villages owing to the lockdown were paid the travel allowances or not!

The inter-state labourers can be recruited either through a contractor (also called Thekedar or Sardar) or on an individual basis. The Act does not apply to individual migrant labourer because it is targeted at an establishment with at least five workers! Hence, the individual migrant labourers who are less than five in any given establishment get no benefit of this Act. Generally, the employer recruits labourers through a contractor. These contractors often exploit the poor and illiterate migrant workers both physically and economically. The Act provides no effective checks and balances for regulating the conduct of contactors & in a way encourages contracting system by allowing the recruitment of Inter- State Migrant Workman by or through a contractor and thus facilitating their exploitation. Instead, there should have been provisions for the mandatory registration of all [not just an establishment with five] interstate workers in a gram panchayat or municipality or corporation. This kind of vacuum in the law leads to exclusion of labourers in unorganized sector. Furthermore, the Act altogether remains silent upon the regulation of intra-state migration.

In Labourers working on Salal Hydro-Project v. State of Jammu & Kashmir it was observed that Inter State Migrant Workmen are generally illiterate and unorganised and are by reason of their extreme poverty, easy victims of abuses and malpractices. It was held that in light of these grim realities it is necessary to have a comprehensive legislation with a view to securing effective protection to Inter State Migrant Workmen against their exploitation. Sadly, at present there is no legislative provision, specifying the liabilities of the contractor or making the contractor liable for mistreating the poor labourers. The inadequacy in the system helps the authorities, Principal Employers and Contractors to escape from their obligations, duties and responsibilities. Therefore, the existing system of inspection must be modified with a penal provision and the offences should be made cognizable.

Another problem faced by migrant workers is of portability of social security benefits. Generally, most of the schemes are location based. For example ration cards, which facilitate the Public Distribution System is a location-linked benefit, leaving crores of migrant workers and families out of the food safety net. Each household’s ration card is linked to a specific fair price shop and can only be used to buy rations in that particular shop.  Therefore, the migrant labourers are able to avail the benefits of such schemes only in their home state. Over the last few years, 10 States have implemented the Integrated Management of Public Distribution System, which allows beneficiaries to buy rations from any fair price shop within that State. But this benefits only the intrastate migrants and not the interstate migrants. However, the central government is mulling over ‘One Nation One Ration Card’ scheme which is scheduled to come into full effect by June 2020, after which a ration card holder can buy subsidised grain at any fair price shop in the country. The main beneficiaries of the scheme will be 45 crores migrant workers in the country.

Likewise, the draft Code on Social Security (2019) was introduced in Parliament in December last year for providing benefits to migrant labourers. The draft states that “the central or state government may notify specific schemes for gig workers, platform workers, and unorganised workers to provide various benefits, such as life and disability cover,” but no further detail has been provided. Furthermore, important areas such as employment injury benefits and provident fund for workers in the unorganised sector are left to the discretion of states. Hence, this draft bill appears to be a mere paper-tiger without any teeth and claws. It is likely that coronavirus may go, but the problem of migrant labourers will remain!

Migrant labourers are among the most vulnerable parts of the “informal sector,” which make up 80 percent of India’s workforce. These workers, despite their numbers, have no political clout. Many are registered voter in their villages. During elections, they are usually in the city where they work and thus are unable to cast their votes. The new coronavirus has given migrants a sudden visibility in the national discourse. But the acuteness of their plight today is a result of the fact that India ignored them during normal times. Given the sheer scale of crisis one can only be idealistic and hope that this migrant crisis at least creates the much required political clout for the mute majority and thus becomes the harbinger of the much needed policy reforms in our labour/migration laws.