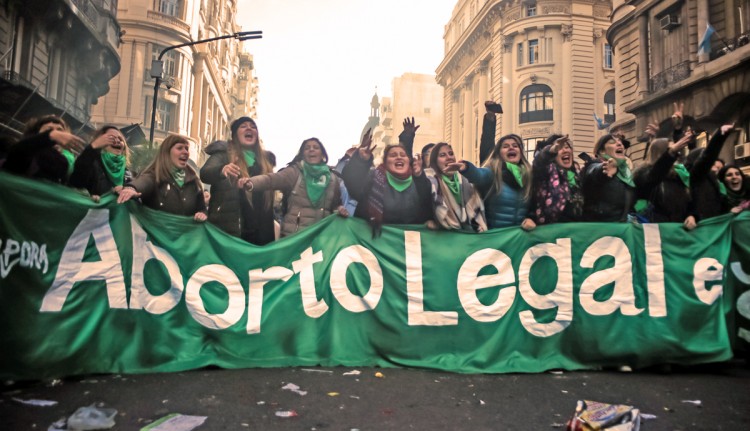 A few weeks back in Argentina a very important Bill was presented before the Argentinian senate proposing to decriminalise abortion up to 14 weeks of pregnancy and thereby guarantee access to safe abortion services. It was a result of National Campaign for the Right to Legal, Safe and Free Abortion which started in 2005. Currently abortion is only allowed in Argentina in cases of rape, or if the mother’s health is in danger. The bill asked for the practice to be legalised in all circumstances in the first 14 weeks of pregnancy.

The President Mauricio Macri, who is against abortion, called for the Congress to debate the latest bill. The news circle were ripe with speculation that the bill will be passed as sometime back only a catholic dominated country Ireland, like Argentina, through referendum had extended the right to abortion to females in a historic decision. The main difference in the case of Ireland and Argentina being that in case of the former referendum was the key and in the latter’s case the representatives of people, the law makers were going to decide the fate of the women who are denied safe abortion. According to the reports of the health ministry of Argentina as many as 17% of women die due to lack of access to safe abortion. The illegality of abortion doesn’t imply abortion is not prevalent. According to statistics available around 5,00,000 abortions occur every year in Argentina which can be roughly equated to around 40% of the pregnancies. Why the state is not ready to legalise an activity when majority of the woman are suffering and have to take recourse to illegal and hence unsafe abortion which leads to debilitating haemorrhaging, severe uterine infections that may impede future pregnancies, and sometimes death? The illegal tag attached to this medical procedure makes it difficult to talk about the issue too. The law and the religion declares abortion as illegal and immoral and in this championing contest by the two institutions one gender suffers the most.

It makes us question that if in 2010 Argentina can pass a law legalising same-sex marriage then what is so different in this case. That law is also going against the religious sensibilities of the society at large. Or is it that the body of a female and her reproductive services are not only being controlled and owned by the Male of the family but also by the patriarchal state which in collusion with religion draws the line of right and wrong. Many in India will not be able to understand this debate around abortion as in our country abortion is legal. However, one need to keep in mind that abortion in India is a “tool” to control the population and not a “right” given to the women in this country. It will not be an overstretch of imagination to see that even in the case of India, right over a female’s body is exercised by the state. The state is telling through various measures like policies and laws, what a woman can and can’t do with her body.  Why is it that a woman cannot decide for herself for her own body without pausing to identify the legality of her actions? Why Procreation and due to that women’s body become a fertile ground for the society and its institutions to exercise their control and maintain a gaze?

Despite important advances in the domain of women’s political participation and economic independence, doctors and spouses continue to exercise control over women’s reproductive health and her body through laws and policies that subject female decision-making to arbitrary extraneous interference.

Opponents of contraceptives and abortion in Argentina sometimes argue that international human rights law as incorporated into Argentina’s constitution protects the “right to life” of the foetus and therefore requires the criminalization of abortion.  The law does no such thing.  International human rights legal instruments ratified by Argentina guarantee women’s rights to life, physical integrity, health, non-discrimination, privacy, information, freedom of religion and conscience, equal protection under the law, and the right to make independent decisions about the number and spacing of children.

Taken together, this body of law, including directly relevant interpretations of this law by authoritative U.N. expert bodies, compels the conclusion that women have a right to decide in matters relating to abortion.

Centre of Advanced Study in Sociology, Delhi School of Economics,

I always mean what I say but I don't always say what I mean... View all posts by resurrectingphoenix

One thought on “Argentina’s tryst with Human Rights: “Illegal” Abortion”